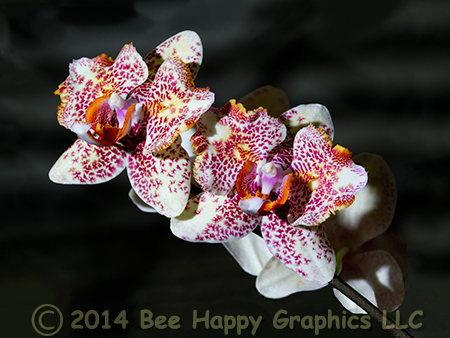 Phalaenopsis Center Stage ‘Pine Ridge Cockleshell’ AM/AOS was produced by Terry Glancy, who owns Pine Ridge Orchids in Homestead, Florida. We met him on a field trip to his home with the Dade Chapter of the Florida Native Plant Society. Besides his home and nursery, the property includes 15 acres of Pine Rockland, for which he and his wife, Barbara, began the difficult restoration process shortly after purchasing in 1978. Very impressive. After the field trip we found this orchid in the nursery.

Cockleshell’s parents were Liu Tuen and Shen X Alida. Mr. Glancy bloomed out a lot of the seedlings he received from John Ewing, who originated that cross in California in 1988, until he found one that produced semi-peloric flowers. He says the clones turned out to be very stable.