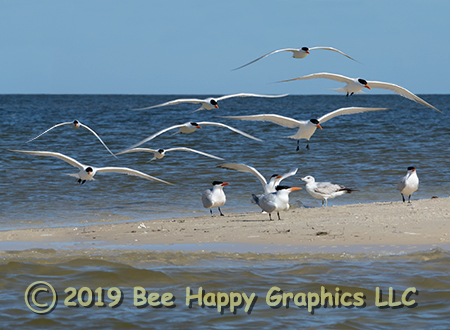 The royal tern is the second largest tern, behind the caspian tern. They inhabit the warmer coastal areas of the Americas; those on the west coast of Africa were just recently determined to be a different species. Their nest is a shallow depression in the sand that may have a sparse lining of debris. The parents deficate around the perimeter of the nest to harden it against flooding. All of the chicks leave their nest within a couple days to join the creche, which could include thousands of other chicks. The parents bring food to the creche for their offspring only.

We took these photographs from the canoe before starting our return trip to Cedar Key after getting photographs of the Seahorse Key lighthouse. The wind had been fairly calm all day, but picked up on the way back in the late afternoon until we found ourselves in the trough of more than a one-foot chop. I wound up capsizing our new canoe while trying to shift some weight to better handle the conditions. As a consolation prize, Nancy got to upgrade her camera and lens.