We have now been to Africa three times. There is more information about these trips below each gallery. So far most of our images are from our East Africa trips. To be included on this page, the image must be taken in Africa, or the subject must be native to Africa.  Within the subcategories, image placement is random.

Sunset in the Baobab Tree 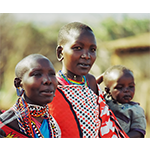 In July and August, 2001 we went to East Africa with Cheesemans' Ecology Safaris. We were attracted to them by their maximum field time and their no-smoking policy. It was our first trip with a tour group. Doug and Gail Cheeseman are outstanding. (We have since taken their tours to Antarctica (twice) and to the Silver Banks.) On the East Africa trip, we spent two weeks in Tanzania and two weeks in Kenya. It was a great trip. Nancy was using a film camera at the time (her Nikon F3 35 mm SLR with a Tokina 100 - 500mm telephoto zoom), so now we have to scan the negatives to process the images. 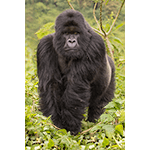 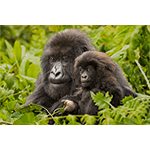 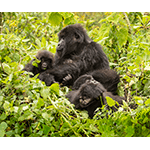 Our last trip to Africa was to Uganda and Rwanda the last half of November, 2015 with Natural Habitat Adventures on their Ultimate Gorilla Photo Safari. While there we also photographed chimpanzees, golden monkees, and plenty of other wildlife. 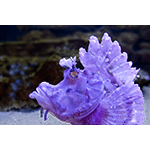 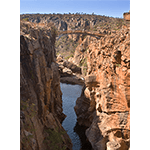 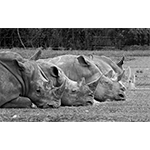 From June 30, 2007 through July, we went on a trip to South Africa with a handful of fellow teachers/photographers organized by fellow Miami-Dade County School teacher and professional photographer Tom Dailey.The highlight was cage-diving with great white sharks, but we did other diving as well (and were also looking forward to getting underwater pictures of the sardine run along the coast of the Indian Ocean, but the sardines apparently didn't read the memo). We also toured quite a bit of the country ashore, including Kruger National Park and other preserves.

The southern white rhinoceros, subject in "The Horn Section", is native to South Africa but was captured in Palm Beach County, Florida.