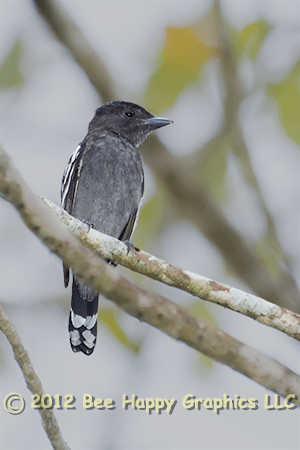 White-winged becards are found throughout Central America and in South America east of the Andes and as far south as Buenos Aires. They live on the edges of mature forests and in second growth at elevations below 1,500 feet, and in mangroves. Look for them at the mid-level of the trees. They eat caterpillars, leafhoppers, spiders, and small berries.

Becards are medium-sized birds with rather flat heads, similar to flycatchers. They are about five inches long, weighing less than an ounce. They are geographically variable in appearance. At the north end of their range, males are gray with black cap and back. In the Amazon basin the are mostly black, overall. Females have pale yellowish underparts. Males have apparently been confused with the completely unrelated Variable Antshrike, which is found only at the southern end of the becard range.

The white-winged becard has eight subspecies, some of which may eventually turn out to be different species.