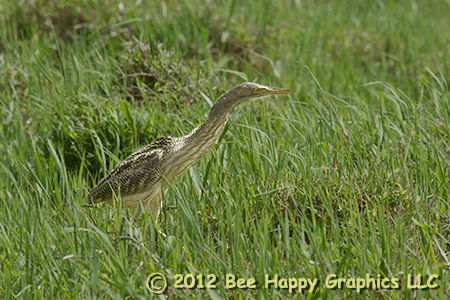 This large member of the heron family (25 to 30" long, 1.2 to 2.6 pounds) lives in freshwater marshes in tropical lowlands. Males weigh considerably more than females. Like other Botaurus bitterns, they are mostly buffy-brown in cryptic (camouflaged) patterns. Both sexes look similar, but females have brown on the tail where males have black. They are usually in areas of high grass or rushes - rarely in open situations, and when frightened, they tend to freeze with their body crouched low and their head raised vertically just enough to see. That is probably why, although widespread, they are rarely seen and little of its life history is yet known.

Their range goes from south of Mexico City through Central America and into South America as far south as Uruguay. It is a patchwork of areas including the Yucatan Peninsula, the Pacific coastal areas of Nicaragua and Costa Rica, a band across Columbia extending into Ecuador and Venezuela, the Guianas, and a band through Paraguay and Uruguay.

Pinnated bitterns are mostly nocturnal, and generally solitary, but they will gather in small groups at a good feeding spot. They breed in the wet season.

"Pinnated" means featherlike, or having leaflets on each side of a common axis. I couldn't find out what the namers were thinking ("featherlike" doesn't seem that descriptive/helpful for birds), but suspect it has to do with the dark patterns on their back. Feathers made of feathers (made of feathers...)? Hmm- [There is a branch of mathematics that addresses that sort of thing. 🤔]