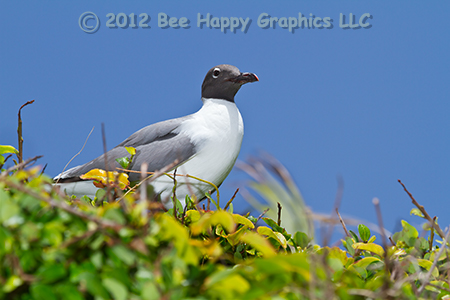 Nancy took this photograph on a 10-day trip led by Brian Rapoza for the Tropical Audubon Society to Trinidad and Tobago. According to Wikipediaarticle, there is a separate subspecies of laughing gull (L.a. atricilla) inhabiting the West Indies and Venezuelan Islands like Tobago. The laughing gull we see in Florida, as well as the rest of North and Central America would be L.a. megalopterus. I found no way to tell them apart. The following information makes no distinction.

This is a medium-sized gull, having a length of about 15" and a wingspan of over forty inches. Breeding adults like this one have a black head and red on the bill. They breed on the Atlantic coast of North America and in the Caribbean. For the winter, they leave the beaches north of Florida and go as far south as the north shore of South America. Non-breeding adults have a white head with a dark smudge behind the eye and a black bill. It takes three years for a laughing gull to get its adult plumage.

These gulls are omnivores and scavengers. They breed in colonies that could number in the thousands, sometimes associated with other species of gull or tern. They nest on sand, rocks, or mats of dead vegetation. Both parents help build the nest. Sometimes a single male will start building a nest as a way to attract a female.