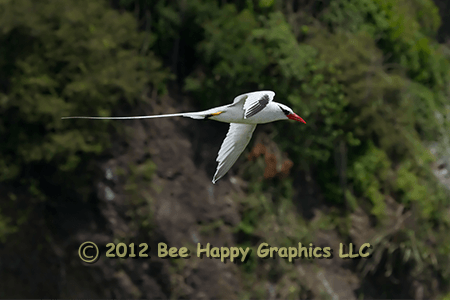 There are three species of tropicbird, and the red-billed tropicbird has three subspecies. This bird is found in tropical waters of the Atlantic, eastern Pacific, and northern Indian Oceans. It is rarely seen from land, however, and your best chance of seeing this bird in the United States would be off the coast of California.

The overall length of this species is up to 41 inches, but its tail streamers take up half of that length. Its wingspan is just an inch or two longer than its overall length. Except for those streamers, it looks similar to a royal tern. Females look the same as males, but are a little smaller, and their streamers are almost five inches shorter.

This bird spends its time out at sea. It can't stand, and isn't that good at walking, so it requires an unobstructed path to take off from land (although it can lift off the water with little effort). Thus it creates simple scrape nests on the face of a cliff from where it is easy to fly off. When it is time for the young to fledge, the parents don't kick the chick out of the nest; they just abandon it. Eventually the chick gets the hint.