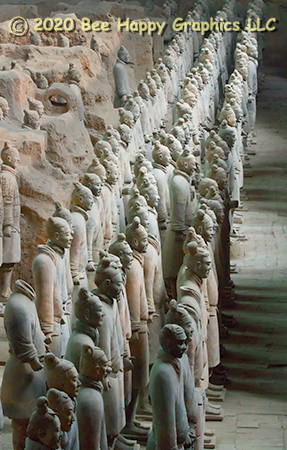 We were on the "Wild & Ancient China" tour with Natural Habitat Adventures, where we spent two days in Xi'an. The first day we visited the Terracotta Army, where Nancy captured this image. Although our main motivation for this trip was to get pictures of the pandas (see Giant Panda Eating and Giant Panda in Tree), it turns out the terracotta warriors were Nancy's favorite part of the trip. The next day we visited the Shaanxi History Museum (where Nancy captured Bronze Horses From Qin Dynasty 210 BC). Our next stop would be Chengdu (and neighboring Ya’an).

Work on this army began even before Ying Zheng was coronated as king of the warring state of Qin when he was thirteen years old, upon the death of his father in 246 BCE (who ruled only three years). It took more than ten years just to complete the terracotta army of more than 8,000 warriors as part of his city-sized mausoleum complex. At one point the project involved around 700 thousand workers. During that time he also conquered the other six rival states and took the title of Qin Shi Huang, becoming the first Emperor (a term he invented) of China in 221 BCE when he was 38. He was effectively the only ruler of the fifteen-year Qin "Dynasty". Before his death in 210 BCE, he standardized the written Chinese language, as well as weights, measures and currency. Using a crew of 300 thousand workers, they built over 4,000 miles of roads, including "The Straight Road", a 500-mile superhighway. Then they connected and expanded existing border walls to form the Great Wall Of China.