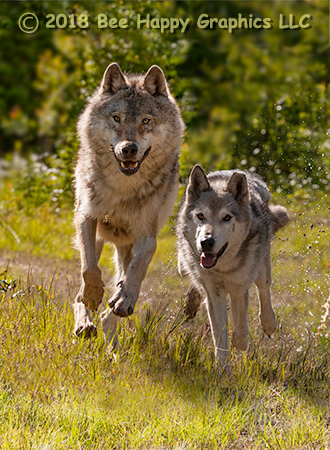 We were in the Canadian Rocky Mountains coming back from our last Sea Explorer trip (to the Northwest) when we discovered an opportunity to photograph gray wolves (Canis lupus) with the Northern Lights Wolf Centre, run by Shelley and Casey Black. Their wolves are captive, but they get their morning exercise in a natural area off of the Northern Lights premises. The male wolf on the left is Wiley, four years old at the time and weighing 110 pounds. Aspen, the female 75% wolf to the right was the Black's first "ambassador". She was eight years old and weighed 60 pounds.